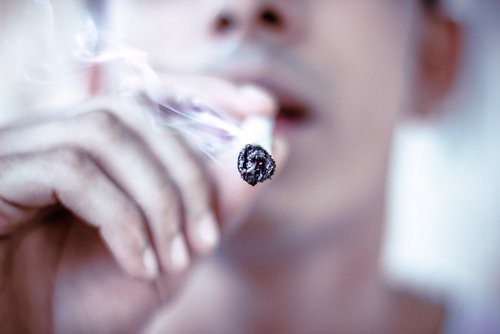 With approximately 34.2 million adults smoking tobacco in the United States and a subsequent 480,000 deaths each year, smoking is easily one of the primary causes of preventable disease and death.

While the percentage of Americans who smoke has decreased significantly, nicotine dependence is still prevalent as more than 16 million people are currently living with a smoking-related disease, including heart disease, lung cancer, and throat cancer.

There are several methods out there that aid insmoking cessation, but clinical studies are now showing that Transcranial Magnetic Stimulation (TMS) may be the answer to kicking the habit for good.

Keep reading to learn more about TMS and smoking cessation.

Nicotine dependence is characterized by the intense craving, compulsive use, or inability to stop using tobacco products – despite its dangerous consequences.

Much like with alcohol or drug addiction, nicotine affects the areas of the brain typically involved in decision-making and behavioral control by triggering certain neurotransmitters to release. As the nicotine tolerance is built up over time, it takes more to achieve that same neurotransmitter release, which is precisely what causes the withdrawal symptoms associated with smoking cessation.

There are plenty of reasons why people take up smoking, but it’s often linked to mental health issues such as anxiety, depression, PTSD, and so on. Having a mental health disorder in addition to nicotine dependence can make it that much more challenging for individuals to quit.

When nicotine dependence is more severe, tobacco users tend to turn to prescription medications such as Chantix and even nicotine replacement therapy such as the nicotine patch or gum.

Nicotine therapy replacement works by delivering small doses of nicotine to the user to take the edge off of their cravings without the additional nasty chemicals in tobacco products. It’s said to ease the normal withdrawal symptoms and has proven to help many people kick the habit. However, it doesn’t help with the psychological aspect of why an individual uses tobacco in the first place.

With medication like Chantix, smoking becomes much less gratifying to the user. This is because the medication works by blocking the brain’s nicotine receptors, which in turn blocks the “reward cycle” that’s triggered by smoking in the first place.

Chantix also helps to ease cravings by releasing small doses of dopamine. However, like most prescription medications, it comes with a list of unwanted side effects.

TMS is an FDA-approved treatment for mental health disorders such as depression, OCD, and anxiety, and recently, smoking cessation.

Additionally, some participants were shown a photo of a lit cigarette while others were not, as a means to ensure that the focus was on nicotine cravings and not some other type of craving.

Over the course of three weeks, 13 TMS treatments were given. The group that was administered the highest frequency and shown the visual had the highest success rate – at 44% – in terms of quitting smoking.

The group that received the lower frequency who were not given the visual cue saw a success rate of 28%.

Clinical researchers and scientists believe that TMS may be the future of smoking cessation as it’s a safe and non-invasive way to rewire the brain for more positive behavioral outcomes. As of right now, it’s believed that TMS combined with nicotine replacement therapy may be the best way for those with a nicotine dependence to kick their habit for good.

Visit our site to learn more about Transcranial Magnetic Stimulation and the other mental health services we offer.